Well, this recent Rohit Shetty action-comedy film called Chennai Express that starred the SRK and Deepika Padukone in the leads might have crossed the ‘3 Idiots’ record of the highest grosser in the box office but trust me this movie does not fall into the category of a mass entertainer. Right from the beginning the film simply lacked a meaning. The mass entertaining film means ‘a film that has the x-factor of entertainment from all aspects to keep the viewers glued to the screen’. What kind of entertainment does it provide with some shitty dialogues (that happen to be the so-called ‘rib-ticklers’), a weak script and some really bad tracks? Our Indian viewers have already got the taste of entertainers, then why does a film like this still attract them? Is it just because of the presence of SRK or because it is directed by Rohit Shetty, the man who delivered ‘HITS’ like Golmaal Trilogy and Bol Bachchan. I would rather say Golmaal was a better venture in his career than this piece of waste in the history of Indian Cinema. After making a film like Singham which has a much better storyline, Rohit Shetty and his team’s latest venture still couldn’t flatter millions of people who have come to understand what a cinema really is. There’s no harm in making entertainers for the masses but it must have something in it that attracts the audience. Young directors like Ayan Mukherji have given us Wake Up Sid, a film that is quite good from a script’s point of view. The same director has directed Yeh Jawaani Hai Deewani, which happens to be among the top 10 blockbusters of 2013. The former film of Ayan is meant for a selected audience but the latter was meant for the masses and thus it is called a mass entertainer. Guess, it doesn’t lack anything to be an entertainer ranging from impressive camerawork, mesmerizing dialogues, flawless acting, wonderful star cast and good storyline to fine direction in the film. It doesn’t fall in the ‘best’ category but being an entertainer it happens to be quite enjoyable. If you take up Shah Rukh’s films into consideration, he has done films like Chak De India!, Maya Memsaab, Swades and My Name Is Khan which has much better presentation from a film’s point of view. He is a quality actor who delivered good films in the past but with this Chennai Express, he just couldn’t give a justification to the position he holds in the country as an actor. 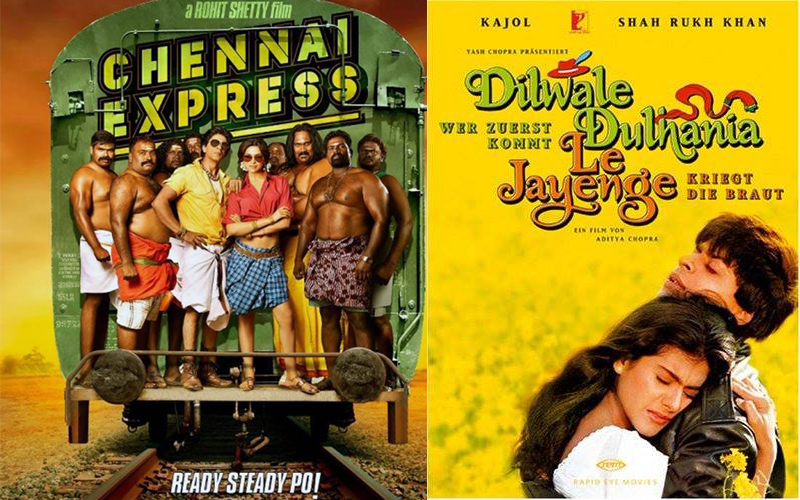 Well, the 1995 blockbuster DDLJ that starred the SRK too was also one of the big time hit entertainers in the film industry of India but the saddest part is that it has been remade in the name of ‘Chennai Express’ that also starts the same actor reprising the same role. The whole concept has been remade by the director Rohit Shetty in a very bad way having the most illogical factors in it as much as possible. But a few things still remain the same even if we saw the two films in two different generations. Let’s take a look at the similarities:
1. The concept: the same old concept of the girl who wants to run away for her love but he guy who wants to win her father’s heart before he marries her. Here the only change was that they got married and then came to win her father’s heart (Aditya Chopra was better out here who gave the film at least some logic).
2. Raj and Rahul: names might be different but the characters are the same. He meets the girl and falls in love as a matter of fate. Didn’t want to come to the girl’s residence but lands up by some or the other reason.
3. Simran and Meenanammalochni: same case with the girl too. They do not wanna marry the guy, who is playing the negative role in the film.
4. Khadus dad: Amrish Puri was the bad angry father of the girl out there who wanted her daughter to get married to the baddie of the film, Parmeet Sethi while Sathyaraj has reprised the same role as that of Puri’s.
5. Baddies: It’s Nikitin Dheer here and had Parmeet Sethi there playing the baddie with the same characteristics such as the love for the girl, can eliminate anything that comes in between he and his destination (the girl).
6. The end action sequence: Both the films end with the action sequence where SRK has to win in spite of not being strong compared to the opponent in order to win over the hearts of the girl’s father.
7. Destination gets diverted: Shah Rukh Khan comes to the girl’s residence with a different motive but ends up falling in love with her and then getting married to her.
8. Compulsory impression: SRK is not satisfied with the girl even after getting married or rather making the plan for the same. He has to impress her father as a compulsory task.

Now this might not be the end of Chennai Express, it might have a remake like the ones Rohit Shetty does since he was the first one to install a third part of his film Golmaal making it first in the history of Bollywood. Using various locations does not make a film look good at all until it has the proper content in it. Content is the backbone of a film. If it’s not strong at all, then the film can’t be presentable enough.
However, what you can look out for in this film are some camera angles that looks really good and a few good tracks like the ones of Titli and Rastaa Chodoo Na. Other tracks are not just worth listening when you aren’t drunk or on a trip.